Rayne (レイン Rein) is one of the main characters of the anime Neo Angelique Abyss. He is a member of the Aube Hunters.

Rayne is a handsome and tall young man with green eyes. He has red hair with a little bit of light blue strands. Rayne has two small earrings; on his left a small silver earring and on his right, an earring with a small looped chain. He wears a green shirt which does not reach his waist covered by a black jacket with red designs outlined with white and a slanting chain. His pants are also black with red stripes. He also wears a collar with red designs and a silver necklace.

Rayne is a smart and clever young man who is recognized for his intelligence and he is quick witted. He is impulsive, but extremely capable and reliable. When he first met Angelique, he seemed to act distanced and almost coldly towards her. But as the series progresses, Rayne developed feelings for Angelique and was always protective of her. Rayne is seen too be mostly calm and level-headed, for in the beginning he asked Angelique to relax and not to act so polite when they're around each other. But at occasions he could lose his cool especially when he argues with his older brother. He tends to lock himself inside his room and study, causing it to be messy.

In the past, Rayne worked as a scientist and a professor where he is an important member of the Foundation with Yorgo (Rayne's older brother), who is also the Director. Rayne is referred to as "that guy" by Erenfried as he has a particular dislike for Rayne. Erenfried has always been jealous of all the attention that Rayne got from Yorgo and other researchers in the Foundation when he worked there. He gets annoyed whenever referred to as "Professor" Rayne, which Erenfried does on purpose, and usually responds by calling him simply "Eren".

Rayne later reveals his Purifying Ability is not natural and he is the result of self-experimentation where he fights Thanatos with a gun. 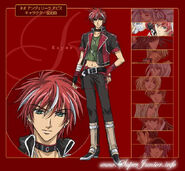