Nyx (ニクス Nikusu) is one of the main characters in the anime Neo Angelique Abyss. He is the Founder of the Aube Hunters who sought out Angelique for her ability to purify.

Nyx appears to be a very handsome young man with long black hair that reaches down to a bit past his shoulders, which is usually tied by a light blue ribbon and dark blue eyes. But in the second season of Neo Angelique, his is hair down. He wears a royal blue coat that matches his eyes. Along with his hair being let down, his coat is removed along with the vest and his shirt mostly unbuttoned.

Nyx first comes off as mysterious and he is positively looked upon by others. He are seen as kind and graceful, and this rings true in his personality. Nyx usually fights off the negative feelings he receives in order to keep others happy.

Nyx has been forced to live for 200 years due to Erebos, the demon that transports Thanatos into the land of Arcadia. When he was younger, the ship his family was in got caught in a fierce storm. As Nyx was drowning, he pleaded for his life, saying that he would do anything to live. Erebos heard him and saved him with the price of painful immortality, but Nyx's parents drowned. This is why Nyx fears and hates the sound of the sea as it reminds him of when Erebos first possessed him. 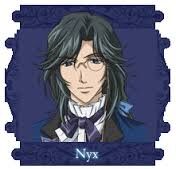 Nyx in the anime 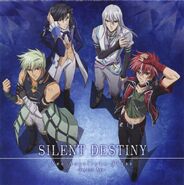