Edit
watch 01:36
We're Getting Mutants in the MCU - The Loop
Do you like this video?
Play Sound

Angelique (アンジェリーク Anjerīku) is the heroine of the anime Neo Angelique Abyss. She is the Queen's Egg and one of the Aube Hunters.

Angelique is a beautiful teenage girl with mid-back length silver-blue hair that has the top tied with two ribbons in each side and green eyes. After leaving the academy to live at Hidamari Mansion in Leiss, she starts to wear a dress with a purple cloth covering a second layer of cloth in pink. She also always wears a blue opal necklace, which was given to her by Bernard when she was young.

In the Second Season, she ties her hair into a long ponytail and she was given a change of clothes by Senoda because she had asked her to teach her how to use a sword.

Angelique is a kindhearted, charming, compassionate & caring girl who has a modest and reserved personality. She is very ambitious as she is very determined to become a doctor to save people and she is also friendly to her friends and the people of Arcadia.

When she was a child, Angelique's village was attacked by Thanatos and she lost both her parents that this inspired and encouraged her more than anything to pursue her ambition to be a doctor when she grew up as she wants to help others and save lives.

Angelique was a normal teenage girl who studies in Melrose Girls Academy. One day, Nyx visited her school to talk to her about the miracle that happened and soon they found out she was the Queen's Egg. She then starts living in the Hidamari Mansion with the other Purifiers and destroy the Thanatos.

In the first couple of episodes, the Orbe Hunter gang gather. In Episode 1, the founder of the Orbe Hunters named Nyx is introduced. He comes to Melrose Girls Academy to request Angelique to come with him back to Sunlitt Mansion. He'd heard of Angelique's ability to heal those affected by the Thanatos, and wanted Angelique to go with him back to the mansion and "work alongside" him. At first, Angie hesitates, as it was her dream to become a doctor so she could help people. Nyx then tells her that she could also help by using her abilities to heal those affected by Thanatos. Still unsure, Angie later on heads out. She meets a cat, which later on she names Erwin, and discovers boy injured by a Thanatos. Not hesitating to help him, she bandages his wound and brings him to her room. Later on, when a Thanatos attacks the school, the boy, whose name is Rayne, leaps out to fight it. Nyx does the same, using his cane, which also turned out to a whip. It runs out that Nyx and Rayne are both from Sunlitt Mansion, and together they fight the Thanatos. For the first time, Angelique contributes as a Purifier by purifying the Thanatos, thereby destroying it. Nyx then tells Angie that she is the Queen's Egg, "Arcadia's only hope". 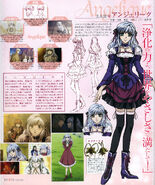 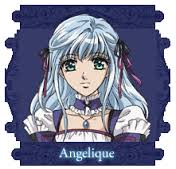